Expedition to Atlantis in Bieszczady - to the sources of the San

The first site available for rafting is 449.1 km of the river at the height of the former village of Sianki (described in the "Blue San" guide). Before you get into your kayak or pontoon there, it is worth going on foot to the sources of the San. This unusual route, which starts in Bukowiec, was inaccessible to tourists until the 1980s.
The expedition and search for traces of the past will make you aware of the rich history of the Bieszczady Mountains. Before World War II, this area was inhabited by several thousand people on both sides of the San, then our border ran several hundred kilometers deep into the eastern areas. Today, this area has the lowest population rate in Poland.
Like the mythological Atlantis "bag of the Bieszczady Mountains" it was once the most economically developed area of ​​the Bieszczady Mountains, and the area still bears traces of a&nbspdense network of narrow-gauge railways that led from Lviv towards Hungary. The inhabitants of the then villages were skilled craftsmen, now they left behind the remains of buildings and roadside crosses. In Sianki you will find the remains of the manor and the restored tomb of Countess Klara née Kalinowska Stroińska (died 1891) and her husband Franciszek. In the area of ​​the former village of Beniowa, you will see fragments of the church and the stone base of the baptismal font with the symbol of a&nbspfish.

At the wild springs of the San

Operation Wisła-San carried out in 1947. after the death of General Karol Świerczewski, it caused depopulation of the Bieszczady Mountains, then nature took over the area. The farmlands became fallow land, the orchards became wild, the basements of the houses were collapsed, eagerly occupied by amphibians and reptiles. Populations of deer, wild boars and roe deer have revived in the forests. Predators have returned to the forests: wolves, lynxes, bears or wild cats crossing with feral domestic cats. The fish have returned to the streams, and huge birds of prey appeared in the sky, headed by the golden eagle and lesser spotted eagle, buzzard, honey buzzard and gadget. The forests have filled up with all kinds of birds, the eagle owl, the Eurasian owl (Latin Strixaluco), the Ural owl, the pygmy owl, as well as all species of woodpeckers, including the white-backed woodpecker, three-toed woodpecker and great woodpecker (Latin: Dendrocopos major) live there. You can also find a&nbspproposal for a&nbsptrip along this interesting route along with a&nbsptourist and natural description in the description of the natural and historical path "In the Upper San Valley" prepared by the Bieszczadzki National Park or on the Internet. 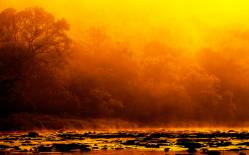