The world of round - leaved sundew - peat bogs

Interesting flora by the San river

For thousands of years, the peat mosses growing in a&nbsphumid pool have raised the self-sufficient ecosystem above the ground level. In the acidic environment of the fen, biological dead parts of mosses decompose very slowly, thanks to which living organisms "climb up", relying on their previously dead parts. These types of layers are a&nbspkind of scaffolding for subsequent new growths.
The abundant presence of mosses makes the bog chemically acidic and has mummifying properties. The acidity of the environment determines the unique flora. When you stop the canoeing trip and go to these areas, you will meet, among others, bog blueberry, lingonberry, mud cranberry and vaginal wool. But be careful. A&nbsppeat bog is a&nbspplace where you can also encounter the unusual round-leaved sundew -&nbspa&nbspsmall predator that hunts insects.

The best on the menu -&nbspinsects!

Sundew is also known as sun dew or drosera. The latter name is derived from the Greek word "drosos" meaning dew. The unusual plant is a&nbspfascinating object of observation for any naturalist large and small.
A peat bog is a&nbspnitrogen-deficient habitat, which is essential for the proper development of plants. Our plant copes well with this deficiency. The green leaves of the sundew have the ability to photosynthesize and thus obtain some of the necessary nutrients, while by catching insects in the plant, they replenish the deficiencies of nitrogen compounds.
On the surface of the small, round leaves of the sundew, there are thread-like protrusions (hairs) that produce droplets of a&nbspsticky liquid, i.e. formic acid. The green leaves and the shine of the droplets attract insects, and the deadly trap also tempts with its intense scent and red color of the insets. Insects that touch the droplets stick to them, and the neighboring hairs quite efficiently and quickly clamp on the prey. While still alive, they begin to digest enzymes secreted from the outside. Digestion usually takes three hours. After a&nbspfew days, the empty chitinous shells of insects -&nbspthe remains of hunting -&nbspare blown away by the wind. 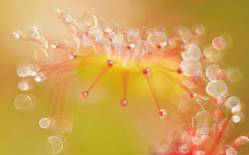