Tigers in a spider's web

For lovers of arachnology

There are plenty of spiders on the San river, if you are interested in the life of arachnids (arachnology), a&nbspcanoe trip will give you the opportunity to observe these animals too often. Especially in the August dawn, it is worth going to the coastal meadow, where dew drops settle on stretched spider webs, providing a&nbspunique opportunity for the photographer. In the meadows of the Podsany it is easy to spot the prettiest spider, which is the striped tygruce (Latin: Argiopebruennichi). It is quite a&nbsplarge spider, belonging to the Araneidae family. Female tigers reach up to 25 mm, males only 7&nbspmm. In Poland, this interesting specimen is one of the largest spiders building hunting nets.

A striped argiope cannot be confused with another spider. Colored as wasp, bee or tiger, it is distinguished by black and yellow stripes. Its contrasting colors are a&nbspwarning, it is a&nbspsignal "do not touch me, I&nbsphave a&nbspdangerous venom". Indeed, its bite is fatal, but only for other insects, such as flies and dragonflies. It is harmless to humans, it resembles a&nbspbee sting, unless the bitten one is allergic to spider venom. Then medical assistance is indispensable! In general, however (and fortunately), most mites have jaws too weak to chew through human skin. 200 years ago, the striped argiope appeared only in southern Europe. From the last century, it began to settle in Poland and as a&nbsprare species it was under protection. In recent years, probably due to climate change, it is a&nbspcommon spider and therefore lost its protected species status.

In the web of love

On warm summer days, males start to look for females. Love in these spiders carries a&nbsphigh risk, because often, before the act of love, the female eats the male. Even more often, the cannibalistic feast takes place after the act of love, and then the male becomes a&nbspprotein dish for the female, who must have a&nbsplot of energy to create a&nbspprotective cocoon, lay eggs in it and look after it until late fall. Adults die in winter, but cocoons keep light winters without damaging the eggs. In the spring of the new year, young spiders colonize the vicinity of the meadow in a&nbsprather unusual way. They do it by flying on cobwebs like on paragliders. Gusty wind can carry spiders for many kilometers.
Thanks to this kind of skills, Tygrzyk perfectly blends in with the Polish autumn, which has always been associated with "woman's summer", full of spiders wandering on threads of transport spider webs.
Literature  states that in some spiders (but not necessarily in Tigers) the transport spider's web may lift the spider up to 2&nbspkm and carry it (certainly with very favorable wind )&nbspup to a&nbspdistance of 5,000 km! Such record flights can last up to 25 days. 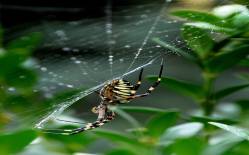